When not in Rome, vote, as Romans do

Vittorio Coco, a host on Toronto’s multicultural CHIN radio station, is campaigning to become a senator.His riding stretches from Cuba to Honduras, Guatemala and Mexico, up north to the United States and Canada. Among his constituents are as many as 137,000 Canadians, 5,000 people from the Dominican Republic and a lonely three in Saint-Pierre and Miquelon. The only thing these voters have in common is their Italian passports.

“I never imagined I’d be running for the Italian parliament,” said Mr. Coco, a genial 66-year-old who wears a dark pinstripe suit and violet silk tie (Italian-made, of course). “Italians living abroad were classified as B citizens for years. This new law allowing us to be elected recognizes us as first-class citizens. Before when we screamed, no one listened in Rome. Now if we scream, they will have to listen.”

Mr. Coco, who has lived in Canada since 1959, is running in Italy’s national elections on April 9 in the new riding of North and Central America, where as many as 403,000 people are eligible to vote.

“It’s kind of an experiment,” he acknowledged over a risotto lunch at an Italian eatery in Toronto. A long-overdue experiment, he feels.

Italy’s move to allow Italians living abroad to be represented in parliament took more than five decades to achieve. Italy had to change its constitution and then persuade dozens of other countries to let dual-Italian citizens living abroad stand as candidates and campaign through the Internet, e-mail, print mail and Italy’s diplomatic network.

The decision to allow diaspora representatives to sit in the Italian parliament with full rights to engage in debates and vote on bills has been controversial both at home and abroad. Six senators and 12 deputies will represent the ridings of North and Central America (three seats); Europe (nine); South America (five) and Australia (one). That leaves 18 fewer parliamentarians for Italians who actually live in Italy.

Critics in Canada question whether Canadian-based legislators in Italy’s parliament will lobby for Italy’s interests in Canada, instead of the other way around. For example, many of the candidates supported the arrival in Canada of RAI, Italy’s state broadcaster, despite opposition from the Canadian-owned cable competitor Telelatino.

The critics also wonder about the wisdom of importing another country’s political factions. Canada was the last country to sign an accord with Italy agreeing to hold the elections, and will “observe and review the running of this Italian electoral campaign in Canada before considering similar requests in the future,” according to a government news release in November.

“Behind closed doors, some Italian Canadian politicians, institutions and business people are nervous and quietly opposed to this entire process,” noted an Italian Canadian journalist who didn’t want to be identified for fear of being criticized, as Ontario MPP Caroline Di Cocco was when she raised her objections to introducing Italian-style politics into Canada.

“Any right-minded person would say to Italy, ‘Canada is grateful that you have sent us your people, your food, your fashion, your furniture, but please don’t send us your politics.’ ”

Mr. Coco, who is with the centre-right Union of Christian Democrats (UDC), defends the process and insists there will be no divided loyalties. He said that, if elected, he would vote along party lines on domestic issues, but otherwise lobby for the interests of his constituents.

He hopes to persuade Rome to help fund an Italian-language school in the Toronto area and improve consular services for Italians living abroad.

“If we lose our Italian identity we’re finished. We will lose our language and our culture,” said Mr. Coco, who was born in the Italian village of Roccagorga.

A few blocks away at his headquarters at a local Italian club, another candidate is gearing up for his campaign. Gino Bucchino, 58, a doctor who immigrated 18 years ago, is running for one of two seats in the Chamber of Deputies in the riding of North and Central America. He is with the Democratici di Sinistra, a centre-left party.

“There are a lot of good reasons to participate in the Italian election. Five years of government led by [Prime Minister Silvio]Berlusconi will come to an end,” said Mr. Bucchino, who used to run a Toronto nutritional clinic with his wife. “We hope the next government will be centre-left. We want more equality for Italian women. More investment in research and education.”

He aims to share the lessons of Canada’s successes — including its immigration and multiculturalism policies — with Italy. He also pledges to represent the interests of Italians living outside the country, and help them gain access to military and old-age pensions, as well as preserve their language and culture.

“Obviously the area I am hoping to represent is extremely huge. Too big, maybe. But we have to start somewhere,” said Mr. Bucchino, who will concentrate his campaign efforts in Toronto. “We have the right to vote. We want to be part of Italy. Why not?”

To qualify to vote, people do not have to speak Italian, nor do they need to have ever set foot in Italy. But they must either have been born in Italy (or born to Italian parents or grandparents), and possess a valid Italian passport.

Voters will receive ballots in the mail this month instructing them to vote for one senate candidate and two members of the House of Deputies. They must return their ballots by April 6 to one of Italy’s consulates in Canada, which will send them in a diplomatic pouch to Italy to be tabulated.

Deputies and senators will be paid about $200,000 a year, and have budgets to hire staff for two offices. They will spend much of their time in Italy, but will stay in touch with their constituents via grass-root committees known as comites.

If he wins, Mr. Coco said he plans to donate half his salary to charity, while Mr. Bucchino said half his salary will go to his party. Of the more than dozen candidates running for the riding of North and Central America, several are from Toronto, where as many as 70,000 Italian citizens live (though only about 20,000 are on the voter list).

Mr. Coco and Mr. Bucchino are concentrating their campaigns here, as well as in Montreal, Vancouver and other cities with large Italian communities.

The unnamed Canadian critic of the process said the elections are an example of “multiculturalism gone wrong.” Only a fraction of Canada’s 1.3 million Italian Canadians will end up voting in an election that may pander to foreign interests, he said.

George Marchi, UDC’s North American chairman, said the elections are good for both countries. “The right to vote is accepted in the community,” said Mr. Marchi, who is the brother of former federal immigration minister Sergio Marchi.

“Italy recognizes its citizens, four million strong, outside the country. The elections are a starting point.” 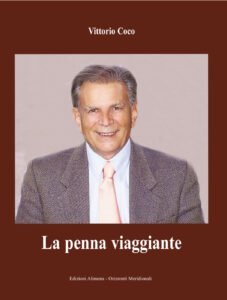